Synopsis from Godreads: The Brothers Karamazov is a passionate philosophical novel set in 19th century Russia, that enters deeply into the ethical debates of God, free will, and morality. It is a spiritual drama of moral struggles concerning faith, doubt, and reason, set against a modernizing Russia.

I know that's a lousy synopsis but that's the best I could find on the internet. :( 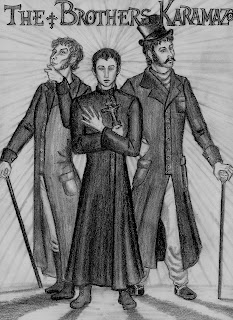 I found all of the Karamazov brothers very fascinating and it was also interesting to compare them. However, to explain the sons you have to look at their father, Fyodor Karamazov, a thorough scoundrel. While he fathers all of the sons he is hardly a father to them.

The first son, Dmitri is the son of Fyodor's first wife. Dmitri is the most like his father of the three sons. He's a scoundrel and sensualist.  The second son, Ivan, is from Fyodor's second wife. He's an atheist and probably the most philosophical of the three brothers and his dialogue has some of the most thought provoking lines from the novel... thought provoking as they may be though, they're wrong. The third son, Alexei, is from his father's second marriage as well. At the beginning of the novel he's a novice in a monastery though later at one of the Elder's encouragement he leaves the monastery though his faith never waivers. All three are raised away from their father for the most part and don't come back until they are grown men. There is also Smerdyakov, a young man rumored to be Fyodor's illegitimate son. It is never clarified whether or not he actually is but when his mother died in childbirth he is taken and raised by Fyodor's servant and comes to be a servant in Fyodor's house. Smerdyakov suffers from seizures and is generally considered to be odd and sullen.

There are many various side plots to The Brothers Karamazov. There is Grushenka, a temptress who flirts with both the father, Fyodor, and the son Dmitri, until both are driven mad with love (lust) for her. This drives forward the main plot of their rivalry, a rivalry so strong that Dmitri swears to kill his father after beating him up in front of his brothers. There is Katerina, the proud young woman engaged to Dmitri more out of a sense of obligation than love after he paid off her father's debts. Ivan though loves her as well... but does she love him? And does Dmitri even love Katerina if he is flirting madly with Grushenka? Katerina is certainly jealous of Grushenka. There is Illyusha a schoolboy that throws rocks at Alexei and his schoolmates but then Alexei strikes up a friendship with him and the schoolmates. Alexei stand in all of this the counselor and friend to all. Everyone turns to him to bring peace... but can he?

Alexei is my favorite character in the novel... and honestly there really isn't anyone else to like. The way in which everyone feels safe in going to him with their concerns and how he is able to give advice and kindness to them all is something I envy.

Everything leads to Fyodor Karamazov being murdered and the question is who did it? Is it Dmitri? It makes sense that he did it after he swore he would murder him. Or could it be Smerdyakov who Dmitri insists is the murderer though he was under a seizure attack at the time. Or could it be someone else?

I found this book fascinating and sad. The characters are so complex and the plot not any less so. It was a long book but if you're wanting to try Russian literature and don't know where to start I would recommend The Brothers Karamazov.