My poor family and friends have had to hear my rant and rave about Jonathan Swift's Gulliver's Travels for the last three weeks or so as I've listened to it. Thankfully I am done with it and they will no longer have to hear my grumblings. ;)
Gulliver's Travels goes towards the literary movement reading challenge and the hard core re-reading challenge. 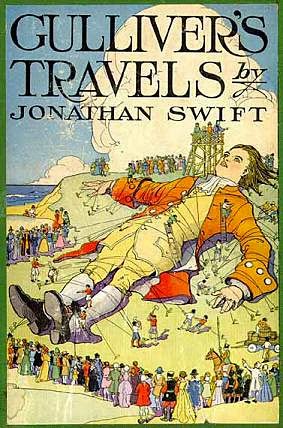 Synopsis from Goodreads: 'I felt something alive moving on my left leg ... when bending my Eyes downwards as much as I could. I perceived it to be a human Creature not six inches high' Shipwrecked and cast adrift, Lemuel Gulliver wakes to find himself on Lilliput, an island inhabited by little people, whose height makes their quarrels over fashion and fame seem ridiculous. His subsequent encounters - with the crude giants of Brobdingnag, the philosophical Houyhnhnms and the brutish Yahoos - give Gulliver new, bitter insights into human behaviour. Swift's savage satire view mankind in a distorted hall of mirrors as a diminished, magnified and finally bestial species, presenting us with an uncompromising reflection of ourselves.

Never before have I disliked a book so much. Never before have I wondered so much how on earth a book was a classic. This was even a re-read for me! WHY WAS I RE-READING THIS????? I get that it's a satire. But the satire, as my Dad agreed with me in saying, is largely lost on modern day, which in my opinion, rather negates it being a classic as classics are always relevant. I did get some of the satire, but not much of it, and I highly doubt most people my age would get any of it. Some of this satire on government was humorous. Also, some of... no, I'd say most of... the satire was just dumb. Additionally, there seems to be an extreme lack of God in this book.
Gulliver aggravates me to no end! He's absolutely full of himself! I was actually somewhat happy when he gets compared to a Yahoo.... I liked him being take down a notch. Incidentally though that section is my least favorite of the book. The fact that he doesn't want to go home to his family makes me MAD. The fact that when he gets home he doesn't even want to associate with his family disgusts me. All of the other times when he got back from strange lands he was a little disoriented at first but then he recovered quickly but apparently not this time! I feel sorry for his family as never in the whole book does he seem to have any particular love for them.
I reconciled myself slightly to Gulliver about halfway through the book when I realized it was like Mr. Collins (from Jane Austen's Pride and Prejudice) was writing a story about himself as the hero and his travels. Then it made a lot more sense. Trust me, the book gets a bit better when you think about it that way. Sometimes Guiliver would say something and I'd think "That's just what Mr. Collins would say!" However, it only made it a little bit more bearable.
The book was really boring. I mean REALLY boring! Gulliver drones on and on about stuff that nobody cares about that he thinks we care about. I read that it's considered a satire on "traveler's tale" which maybe the reason for that but it's still not good!
Side note- Far too many references to urinating and defecating were included in the book that just made me wonder WHY???? They weren't important! They were just disturbing most of the time. Don't even get me started on the women of Brobdingnag and all that went on there! If you've read it you know!
If you don't understand how much I dislike this book at this point you haven't been reading been reading this review! This is my least favorite book of all time and never before have I rated a book one star on Goodreads until now. I was telling my father how much I hated it and he told me that he too did which consoled me a lot. When I read it the first time back in high school, I was reading it for school and my Dad said he was sorry he had us read it. I've already decided I'm never making my kids read it!