For the Classics Club I read A.E.W. Mason's classic novel The Four Feathers. 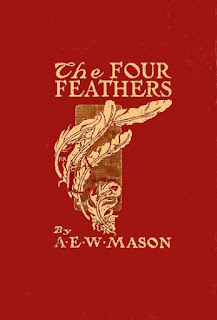 Synopsis from Goodreads: Just before sailing off to war in the Sudan, British guardsman Harry Feversham quits his regiment. He immediately receives four white feathers—symbols of cowardice—one each from his three best friends and his fiancée. To disprove this grave dishonor, Harry dons an Arabian disguise and leaves for the Sudan, where he anonymously comes to the aid of his three friends, saving each of their lives.Having proved his bravery, Harry returns to England, hoping to regain the love and respect of his fiancée. This suspenseful tale movingly depicts a distinctive code of honor that was deeply valued and strongly promoted by the British during the height of their imperial power.

I grew up watching a film version of this book so I've known the story for years though of course the movie differs from the book. The book was originally written in 1902 and while an adventure novel also has a healthy dose of romance imbedded in it. I was a little worried I would find it slow paced since it was an older adventure novel but that was not the case at all. The book kept me intrigued throughout with the adventure and the romance. It was also beautifully written in terms of human emotions. I was moved for each character. I liked Harry a lot and Ethne was great though sometimes I was a little peeved with some of her decisions. Ethne is one of the more interesting classic adventure females though... sometimes I feel like the females get lost in the classic adventure novels but she had a strong character that kept her in the spotlight too. Durrance was a complicated character and I'm not sure if I liked him or not. I pitied him.
Overall I enjoyed the book and I'd recommend for those who love a classic adventure novel. It's not as good as Scarlet Pimpernel but it stands on it's own for sure.