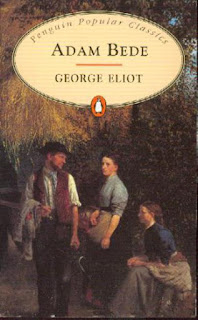 Synopsis from Goodreads: In the early days of the Napoleonic Wars, Adam Bede is hardworking carpenter with enormous physical strength and considerable force of will. But Adam has a single flaw, his blind love of Hetty Sorrel, a vain, shallow dairymaid who spurns Adam but is easily seduced by the local squire. The bitter and tragic consequences of her actions shake the very foundations of their serene rural community.While Adam Bede represents a timeless story of seduction and betrayal, it is also a deeper, impassioned meditation on the irrevocable consequences of human actions and on moral growth and redemption through suffering.


First off I'm going to try to avoid spoilers in this review but the comments are a free for all! I do love discussion so I'd love to hear other's thoughts.
I had mixed feelings about reading this book. Before this of George Elliot's novels I'd only read Middlemarch (which was meh) and Silas Maner (okay). It has been several years since I read any of her novels and I didn't have terribly good memories. I do think I can better appreciate her novels now though than I did back then. I would have hated Adam Bede if I'd read it years ago... kind of like I felt pretty meh about Middlemarh when I read it hears ago. Still though, I wasn't particularly fond of Adam Bede. I did find it intriguing and thought provoking.
None of the characters were particularly my favorite though. The title character, Adam Bede, is a great guy. He's a disciplined and virtuous man. He's got a major flaw though hand one that's hard to ignore... he's deeply in love with Hetty, who is a vain, self-centered flirt. She's a jerk and an idiot. She's also naive which I think is supposed to make us pity her. In case you missed my subtle clues... I really don't like Hetty. There's another person you dislike though.... though somehow I hated him less than Hetty, which wasn't really fair. Arthur Donnithorne is portrayed as a complex character who wants to do the right thing but never follow through. He's also very self-centered and in my opinion doesn't think there should be any consequences to his actions because he's rich and privileged. He disgusts me too. In fact, the more I write about him the more I dislike him. However bad those two characters are, though, Elliot makes you pity them both. She doesn't seem to attribute much guilt to them even though they both do a multitude of guilty offenses. On the other hand though we have Dinah, a female methodist preacher who is very passionate about her faith. I'm not going to get into an argument here but I do disagree with women being preachers. Since that how it was in the book I just went with it. Dinah is the moral center of the book. She is a virtuous women who is passionate about her calling as a preacher. She gives forgiveness and grace easily She is the only person to really embrace Hetty after the scandal erupts. You're supposed to love her and really that's what ends up happening. I like the other pastor in the book Mr. Irwine. He's also a virtuous and caring man and while he doesn't embrace Hetty per say he does still care for her and try to help her amidst the scandal.
Now one thing I find interesting is George Elliot's sense of morality in her books. However, looking her up I get a better idea of who she was and why books are the way they are. Now, for those who don't know who might be confused and wondering why I keep calling George Elliot "her", George Elliot was the pen name for Mary Anne Evans. Marry Anne had a pretty immoral life and did not identify as a Christian. So that helps to explain her messed up morality in her books.
By the end of the book I was just hoping that the right characters would end up together so that the book would at least have a satisfying conclusion. However, I will say George Elliot is a good author and the psychology of her novels keeps them intriguing. I'll probably read more of her books. They're just not my favorite. I like my books to be though provoking but I also want them to be light and happy.... I like Jane Austen... and George Elliot is no Jane Austen.