Book Review- A Princess of Mars

For the Classics Club I read Edgar Rice Burroughs novel A Princess of Mars. 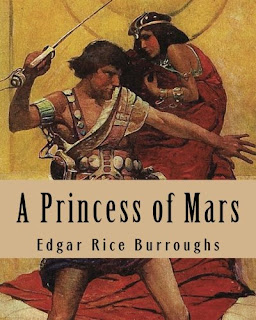 Synopsis from Goodreads: Suddenly projected to Mars, John Carter found himself captive of the savage green men of Thark. With him was Dejah Thoris, lovely Princess of Helium. And between them and rescue lay a thousand miles of deadly enemies and unknown dangers.

I've wanted to read this ever since watching its film adaption John Carter. Did I really like John Carter? Not particularly but I read a review of it that mentioned the book and how much the reviewer enjoyed it so since I semi-enjoyed the film I decided to read the book.
The book is much better!!!!
A Princess of Mars is a fun sci-fi, adventure romance. This was my first Edgar Rice Burroughs novels so I wasn't  sure what expect but now I'm excited to read more of his books.  It's one of the first science fiction novels (read the wikipedia article on science fiction's beginnings... it's so interesting!). I'd say it's much more engaging that most early science fiction novels I've read. It was written in a serial format though so it probably had to be. A lot of the earlier science fiction novels focus so much on the science that they leave the fun behind. A Princess of Mars does not. There's some science but there's lots of fun adventure and of course romance as well.
John Carter is a Civil War hero and after the war goes prospecting in Arizona. While there through a series of events ends up transported to Mars. What follows is adventure and intrigue as he meets the green men of Mars and tries to navigate their cruel system. As the book progresses he meets a different people of Mars... the red men of Mars and most specifically Deja Thoris... their proud and beautiful princess. As they both try to escape the cruelty of the green martians they fall in love. (duh) I really like John Carter. He's such a noble character and the deep love he carries for Deja Thoris is endearing. All of the characters in the book were interesting and you pretty much either loved or hated them. I also really liked the dog like creature Woola that John Carter befriends. Dogs are truly a man's best friend... even if they're Mars dogs. ;)
A little note.... most book covers of A Princess of Mars show Deja Thoris in bikini like garb. That's honestly better than what she actually wears in the book... which is nothing but jewelry so the reader is given to understand. Don't let that turn you off from the book though. Her lack of clothing is only mentioned just as much as I just now mentioned it. It's not dwelt on at all and it's not sexual. Is it ideal? No. But I didn't find it distracting from my enjoyment of the book.
So overall I really enjoyed this book and I'd definitely recommend it for those who enjoy adventure romance novels and wouldn't mind a little sci-fi sprinkled in it as well.