Book Review- A Raisin in the Sun

I read A Raisin in the Sun by Lorraine Hansberry for The Classics Club. 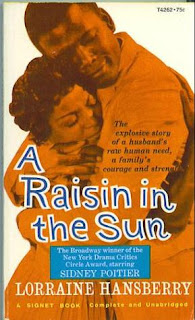 Synopsis: This lauded drama follows the Youngers, an African-American family living together in an apartment in Chicago. Following the death of their patriarch, they try to determine what to do with the substantial insurance payment they'll soon receive. Opinions on what to do with the money vary. Walter Lee wants to make a business investment, while his mother, Lena, is intent on buying a house for them all to live in -- two differing views of the American Dream.

I really didn't know much about this book before I read it except that it was a play and was written by an African-American author. I hadn't really enjoyed the last American play I'd read.... Death of a Salesman... so I didn't have high expectations for this one. However, I was completely blown away by how much I enjoyed A Raisin in the Sun! I found each chapter in the Younger family intriguing in their own way. I didn't necessarily like them all but each of their emotional journeys were fascinating. I'm not sure I had a favorite character as they all had too many faults for me to love them but as I said they were so interesting. Walter Lee annoyed me the most probably though you do feel sorry for him. I feel like he's so insensitive to his wife. On the other hand, I feel like his wife, Ruth, doesn't really listen to him. They both have a lot going on and their relationship ends up being complicated. Beneatha is an intriguing character and I'm not quite sure what we're supposed to think of her or what I do think of her. I liked her for the most part though. The mother and matriarch of the family, Lena, is a women with a lot of pride and then desire to further the family's fortune. She works hard for the family. For the most part I like her too.
So all of that to say... I liked the book, the characters were interesting and I think it gives one an intriguing glimpse into what it was like to be an African-Americna family in that time period.