Book Review- The Once and Future King

For the Classics Club I read T.H. White's novel The Once and Future King. 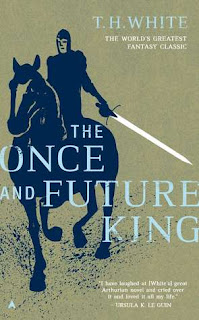 Synopsis from Goodreads- Once upon a time, a young boy called “Wart” was tutored by a magician named Merlyn in preparation for a future he couldn’t possibly imagine. A future in which he would ally himself with the greatest knights, love a legendary queen and unite a country dedicated to chivalrous values. A future that would see him crowned and known for all time as Arthur, King of the Britons.
During Arthur’s reign, the kingdom of Camelot was founded to cast enlightenment on the Dark Ages, while the knights of the Round Table embarked on many a noble quest. But Merlyn foresaw the treachery that awaited his liege: the forbidden love between Queen Guinevere and Lancelot, the wicked plots of Arthur’s half-sister Morgause, and the hatred she fostered in Mordred that would bring an end to the king’s dreams for Britain--and to the king himself.

I had heard many good things about The Once and Future King before I read it from fellow bloggers. Not long before I started it, though, I heard probably the only negative review of it from my dad, who I tend to see eye to eye with on books, movies and the like. That made me a little nervous but I still went into it with high expectations, assuming it would be one of those few books my dad and I disagreed on. Now having finished it though I think I find myself somewhere in the middle. I did enjoy it but I can also see the flaws my dad saw. I feel it's different than any other Arthurian legend book I've read. Now, to be fair, I haven't read Le Morte d'Arthur by Mallory, which White seems to have based The Once and Future King off of and heavily references. My memory isn't perfect on those books and I know the legends do vary but I feel like there was a fair amount in The Once and Future King that I don't recall from the other books I've read. One thing I found interesting was that I feel White tried very hard to make you understand each character and even if you couldn't like them to at least pity them. He was fairly successful but as with each time I read an Arthurian legend my heart is left cold for Guinevere and Lancelot. This book actually made my heart even colder towards Guinevere than I usually am. It let me sympathize with Lancelot slightly and I feel he became a far deeper and more complex character but I still in the end found him weak and unlikable. You like Arthur for the most part but there are times (like when he pulls a Herod and tries to get of Mordred by killing all the babies) that he's quite unlikable. In the end though he seems like a naive dotard. He's caught up in his ideal and fighting against everything to keep it from falling apart even though it already has. And really.... was his an ideal actually an ideal? There is no such thing as utopia. Even before everything completely fell apart things were a mess. Knights were killing each over (I'm looking at you Orkney faction!) left and right and Arthur forgave them left and right. The book is somewhat of a political commentary, which is interesting.
Overall, thats' what this book is... interesting. As an adaption of the legends it's unique and I am glad I read it. At some point (probably not in the too near future) I'll be going back to some of the other Arthurian legends novels I've read to see how they compare and eventually I'll actually read Mallory's Le Morte d'Arthur.

Overall, while reading this, I remembered how sad the legends are and how much I enjoyed the TV show Merlin for giving me a lighter and more family friendly version.