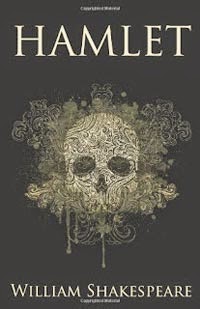 I've read many children's or abridged versions of Hamlet but have never gotten the full story until now. This was an intriguing story for me.

The most interesting part for me of the whole play was that the line "sweets for the sweet" comes from it. Who knew? If I had been told that it came from a Shakespeare play I certainly not have guessed a tragedy. Speaking of tragedy, Hamlet is just about the most tragic story I've ever read. It's depressing! Everybody dies! Oops spoiler! But at leas I didn't say who died... just that everyone does. ;)
Overall I think it is a good story and one that has most obviously inspired other writings including (I'm given to understand though I haven't watched it) the Disney film The Lion King. There are a lot of good lines in the play, besides the one I mentioned above, such as the famous "to be or not to be" speech.  I would like to watch a film version to see how Hamlet is played out on screen to get a better feel for it but in my opinion it gives you a lot of food for thought though it is very tragic.

Follow my blog with Bloglovin
Posted by Lois Tinúviel at 9:16 PM