It's been my goal to read one of Georgette Heyer's books for a few years now and with reading The Grand Sophy I finally have completed that goal! 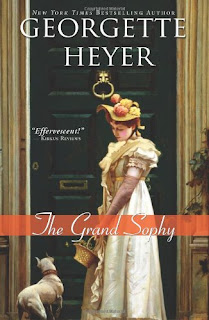 Synopsis from Goodreads: Resourceful, adventurous and utterly indefatigable, Sophy is hardly the mild-mannered girl that the Rivenhalls expect when they agree to take her in. Kind-hearted Aunt Lizzy is shocked; stern Cousin Charles and his humorless fiancée Eugenia are disapproving.With her inimitable mixture of exuberance and grace Sophy soon sets about endearing herself to her family, but finds herself increasingly drawn to her cousin. Can she really be falling in love with him, and he with her? And what of his betrothal to Eugenia?

I've often heard Georgette Heyer compared to Jane Austen... which I can understand.... though Georgette Heyer is like the not as talented cousin of Jane Austen. Many of the same aspects are there: interesting characters, wit, romance and an interesting plot. Jane Austen just does it better... I would also say there's a certain amount of depth to her books.... a knowledge of people that she infuses in to her books... that is lacking in Heyer's novels. However, Heyer's books... at least so far as I can tell from The Grand Sophy... are still quite enjoyable.... though I would say rather a guilty pleasure. However, it's probably not fair to compare the two authors. They are both good in their own right.
So... how did I feel about The Grand Sophy? I loved it! More then I though I would. In fact I felt guilty for how much I enjoyed it. It wasn't great literature but it was just fun! I loved Sophy herself and I see myself a bit in her. Sophy is unconventional, she's fun but she still somehow keep her head on straight (for the most part). Everyone can't help but love her even when they're frustrated with her! She was maddening at times and often she left me questioning her ideas but she always came out on top. The other characters were great as well. Cousin Charles really grows on you as the story progresses and you can totally see where THAT is going. Eugenia is dreadfully dull... she kind of makes me think of Mary Bennet. Augustus Fawnhope is a riot! He's a poet in the true Wodehouse sense. Lord Charlebury is such a good egg. I like him a lot. How dare he succumb to mumps while courting Cecelia though?
This was such a fun and outlandish book and I'd recommend it all around. I can't wait to read more Georgette Heyer!