For the Classics Club I read Anthony Trollope's novel The Way We Live Now. 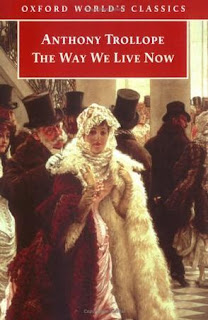 Synopsis from Goodreads: At first savagely reviewed, The Way We Live Now (1875) has since emerged as Trollope's masterpiece and the most admired of his works. When Trollope returned to England from the colonies in 1872 he was horrified by the immorality and dishonesty he found. In a fever of indignation he sat down to write The Way We Live Now, his longest novel. Nothing escaped the satirist's whip: politics, finance, the aristocracy, the literary world, gambling, sex, and much else. In this world of bribes and vendettas, swindling and suicide, in which heiresses are won like gambling stakes, Trollope's characters embody all the vices: Lady Carbury, a 43-year-old coquette, 'false from head to foot'; her son Felix, with the 'instincts of a horse, not approaching the higher sympathies of a dog'; and Melmotte, the colossal figure who dominates the book, a 'horrid, big, rich scoundrel ... a bloated swindler ... a vile city ruffian'.

I've enjoyed each of Trollope's novels I've read and The Way We Live Now was no exception. It was my most recent Classics Club spin pick. I was trying to finish it before our Hobbit was born and got half way through, which wasn't too bad considering it's length. However, thanks to the free ebook I still got it finished it up in time after she was born. It's much easier to read an ebook on my phone then to hold an actual book while also balancing a baby.
The characters really drive the story, as the synopsis suggests. The story begins by introducing Lady Carbury who is one of the central focuses of the book. She is not the most likable character, is hypocritical and conniving but I think by the end of the story she's one of the few characters who's improved... though not by a lot. Her son Felix is an absolute scoundrel in every way and he utterly disgusts you throughout the book. His mother indulges him to an annoying amount while often slighting her daughter Hetta, who is actually a virtuous woman. Their cousin Roger Carbury is a virtuous man who tries to help their family but also is in love with Hetta, who has refused his advances. I really want to like Roger and most of the time I do but I feel he bears grudges and has too deep of anger towards Paul Montague, the man Hetta actually likes. I understand he's upset since of course he's in love with Hetta himself and of course Paul breaks his promise but I feel like Roger should have accepted that Hetta did not want to marry him. Paul Montague, the man that Hetta loves and who loves her, does not please me either though. Before he met Hetta he was affianced to an American widow with a shadowed past. He ends up ending their engagement due to her questionable past before meeting Hetta. However, after becoming romantically interested in Hetta the widow, Mrs Hurtle comes to England to try to win him back. Paul is absolutely terrible about ending it with her. He visits her to tell her he will not go back to her but still ends up kissing her and this happens over and over again. He hates her and wants to end it with her but he keeps going back to her! Dude stop it! I just feel like Hetta deserved better then him. Most of the book I was rooting for her to end up marrying Roger honestly. Mrs. Hurtle herself is quite a woman with quite a past. She's not my favorite but she is interesting and I think she improves throughout the story.
Then of course there is the overshadowing character of Melmotte, a man known for his power and health with a shadowed past and a reputation for being a swindler. Everyone is enamored with him though and forget the probability of him being a con as they're caught up in his wealth and power. His daughter Marie is sought by every young lord as it is assumed she will get a hefty dowry on her marriage. Marie is weak willed and naive but becomes a stronger character as the story progresses. She is sought after by Felix Carbury for her wealth and she returns her advances, thinking he loves her and falling for him. Felix proves himself as despicable as ever though and it takes a long time for Marie to realize her error.
There's many other little side plots that flow through the story and much intrigue. I was so caught up in the story I just had to keep reading to find out what would happen to each character so even though it was long it went pretty fast. It makes me think a little of a Charles Dickens novel and a little of a Jane Austen novel so if you enjoy those two authors you'll probably like it.
I'm hoping to watch the 2007 miniseries in the near future. Have you seen it? Did you enjoy it?