For the Classics Club I read William Shakespeare's play Measure for Measure. 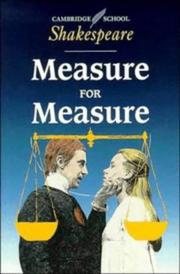 Synopsis from Goodreads: Measure for Measure is among the most passionately discussed of Shakespeare’s plays. In it, a duke temporarily removes himself from governing his city-state, deputizing a member of his administration, Angelo, to enforce the laws more rigorously. Angelo chooses as his first victim Claudio, condemning him to death because he impregnated Juliet before their marriage.Claudio’s sister Isabella, who is entering a convent, pleads for her brother’s life. Angelo attempts to extort sex from her, but Isabella preserves her chastity. The duke, in disguise, eavesdrops as she tells her brother about Angelo’s behavior, then offers to ally himself with her against Angelo.

Measure for Measure was one of Shakespeare's plays that I really was not familiar with before reading. That always makes for a more difficult reading experience for me with Shakespeare's plays. I always like to have a preliminary idea of what his plays are about before I read them as it's just easier to follow them then. I did read a synopsis beforehand because of that, which did help. This was definitely an interesting play and I'm glad I got the chance to be introduced to another of Shakespeare's plays. The play is basically about hypocrisy and morals.
Claudio is supposed to be moral and cleaning up the city but is really just an immoral hypocrite. The Duke is a moral person with a good heart who tries to help everyone.... though I'm not sure he necessarily goes about it the best way. Isabella is the only truly moral one in my opinion, sticking to her virtues despite an impossible situation. With how messed up of a situation this play portrays it surprisingly has a happily ever after ending.
There's a lot to discuss in this play and I think it would be a very interesting book to read in a group setting and discuss. I'm definitely wanting to watch it now. Have you read it or seen the play live? Drop your thoughts in the comments below!