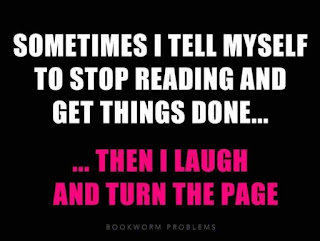 This last week I did the inconceivable (obviously I don't know what that word means). I worked four twelve hour shifts in a row. Since we only work three shifts a week, normally three is the most we'll work in a row but somehow my schedule ended up with me working a Saturday night (which I don't know how that happened since I never sign up for Saturdays) and then Sunday, Monday and Tuesday. Four nights in a row! Needless to say I was basically a zombie at the end of it. I found that keeping a positive attitude is absolutely key to getting through it... though I didn't always achieve that.
I survived though.
Last week I tried to catch up on some of my reviews too. I got two done and they were the hardest for me as they were for non-fiction books, which for some reason I have a harder time writing reviews for. I'm also trying to work through movie reviews as well.
I was also able to go to a library book sale this past weekend and round up twenty-one books for only five bucks. :)
And last but not least I got to see Captain America: Civil War! It was splendiferous! :)