Book Review- Through Gates of Splendor 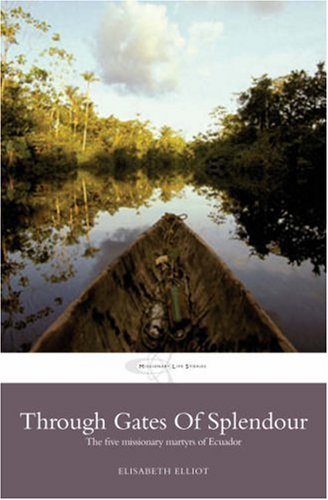 For the Mount TBR pile challenge I read Elisabeth Elliot's book Through Gates of Splendor.


Synopsis from Goodreads: In 1956, five young men, including Elliot's husband, Jim, traveled into the jungles of Ecuador to establish communication with the fierce Huaorani Tribe, a people whose only previous response to the outside world has been to attack all strangers. The men's mission combined modern technology with innate ingenuity, sparked by a passionate determination to get the gospel to those without Christ. In a nearby village, their wives waited to hear from them. The news they received - all five missionaries had been murdered - changed lives around the world forever. Written while she was still a missionary in South America and at the request of the men's families, Through Gates of Splendor was Elisabeth Elliot's personal account of the final mission of these five courageous men. Filled with quotations from letters, material from personal journals, a wealth of photographs, and an epilogue update, this book tells a lasting story of God's grace, unconditional love, and great courage.

If you're a Christian you've probably heard of this book. I certainly did growing up and I'm surprised it has taken me this long to read it. I thought I knew the basic premise of the story... that the men went to the South America as missionaries and ended up getting murdered in the process by the natives, leaving their wives who actually stayed to witness to the murderers of their husbands. What I didn't know was while yes that's the gist of it there is so much more that goes on and that is only the conclusion. It was incredible learning about the different lives of each individual on that trip and their motivations, struggles and convictions. They were wholeheartedly dedicated to God and serving Him.
My favorite quote from the book happens right before the men go on their fateful trip.


"The other wives and I talked together one night about the possibility of becoming widows. What would we do? God gave us peace of heart, and confidence that whatever might happen His Word would hold. We knew that 'when He putteth forth His sheep, He goeth before them.' God's leading was unmistakable up to this point. Each of us knew when we married our husbands that there would never be any question about who came first- God and His work held first place in each life. It was the condition of true discipleship; it became devastatingly meaningful now."

This was a beautiful and meaningful book and one that I'm glad I've finally gotten around to. Read or not? Read!