This week's Top Ten Tuesday theme is a freebie so I'm going with my Top Ten Literary Couples! :)
When I'm reading a book or watching a movie a lot of what I look for in a couple is respect and a great sense of humor. :) I think that is reflected in this list. :)
Obviously I couldn't just stop at ten! So here you go in on particular order! 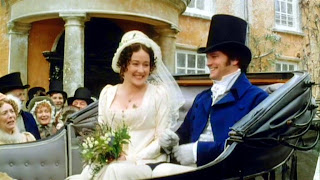 And for the fun of it.... movie and TV show favorites as well!
I'm sure I missed some great ones so comment and remind me!