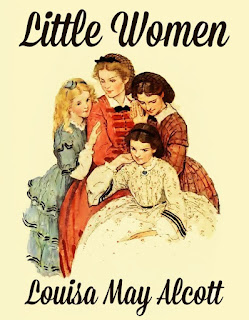 I've read this novel many times before but probably not within the last five years. I've become far more sentimental in the last couple years so I kind of gushed over some romance bits, which isn't normal for me. My poor cousins had to hear me go on and on about how much I loved Professor Baehr and how he needed to propose to Jo! Yep, I actually like Professor Baehr and Jo together as I like Laurie and Amy together. At the beginning of the book I moaned a little to myself that Jo and Laurie would be so cute together, but I concluded, like Marmee, that they were too much alike. So disagree with me if you will but that's my opinion. :) It was kind of helped along by the fact that the narrator of the audiobook did a really cute German accent for Professor Baehr. How could you not fall in love with that?

Sometimes Meg frustrated me... a lot. I don't have the personal struggles she has... being rich has never been on my bucket list so I think that's why I find it harder to understand her sometimes. Also, she's always acting so much like a... girl! For example: When John proposes to her and she plays with his poor affections for awhile because that's what other girls do! She does things like that other time but that's the first example I thought of. Sometimes I feel like she expects John to pick up on her subtle cues, which is something that I find very annoying about females! I'll admit, sometimes I do that, but I try not to. That's got to be annoying to guys and not at all helpful! I do love Meg, don't get me wrong, but sometimes she irks me.

Amy has grown on me since I first read the book. I see much more of her maturation throughout the story this time reading it than I have other times.

So random note. A lot of people say that this has great feminist themes and others say exactly the opposite and condemn it for not having strong enough feminist themes. I honestly didn't think it went either way. I'm not a feminist so I don't care if it doesn't have the feminist themes that other women want. I felt like though it was a good balance of the girls working hard and becoming independent but also finding love and settling down and getting married. As you all know, I just graduate from nursing school and once I pass my state boards I will be in a position to make a good income and be independent. However, my lifelong dream has always been to be a wife and mother and this has not been undermined by my getting a college education (I would actually much rather be a wive and mother than a nurse... not that I don't like nursing). I kind of feel that is how it is in Little Women... that's not a perfect analogy though and each of the girls are different.

Little Women goes in the transcendentalism literary movement because it focuses on independence, individuality and looking to self instead of wealth and status. The fact that Little Women is transcendentalism is it's main downside because sometimes that philosophy gets in the way of the beauty of the story.

So I know my thoughts were random and scattered but that's how I roll. ;) When you've read this book as many times as I have you don't know where to start a review or how to finish it. ;)