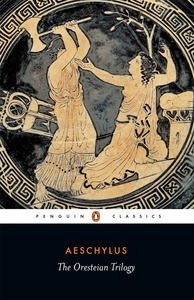 For my Play On challenge, Books in Translation challenge and Pre-Printing Press challenge I read the Greek play Agamemnon by Aeschylus.


Synopsis from Wikipedia: The play Agamemnon details the homecoming of Agamemnon, King of Argos, from the Trojan War. Waiting at home for him is his wife, Clytemnestra, who has been planning his murder, partly as revenge for the sacrifice of their daughter, Iphigenia, and partly because in the ten years of Agamemnon's absence Clytemnestra has entered into an adulterous relationship with Aegisthus, Agamemnon's cousin and the sole survivor of a dispossessed branch of the family (Agamemnon's father, Atreus, killed and fed Aegisthus's brothers to Aegisthus's father, Thyestes, when he took power from him), who is determined to regain the throne he believes should rightfully belong to him.

This play is confusing. Especially if you don't know your mythology. I read a lot of Greek and Roman mythology when I was younger but apparently the information has fled my brain because I was entirely lost. Thankfully halfway through it I stopped to eat lunch and my sister filled me in because her memory is far better than mine. Once I understood the setting, I was able to enjoy it a lot more. So my recommendation if you read this play is to find out about the setting and about the characters before you start it. It will make the reading experience ten times better. :) Just reading that above synopsis would have helped me a lot while i was reading it.... unfortunately I didn't. :(
That being said, I'm still not a big fan of Greek plays but it was interesting. It was also incredibly tragic though. Nothing cheery about those Greek plays. :(
All in all, as far as the Greek plays that I've read go, it's better than most. :)