Book Review- The Wind in the Willows 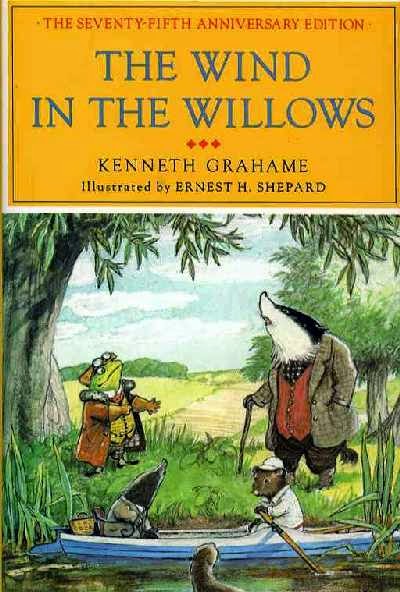 For my re-reading challenge I completed Kenneth Graham's The Wind in the Willows. I don't remember anything about reading it when I was younger, I just know that I did. Growing up I watched a film version of it that my grandparents had a lot, and now that I've re-read the book I'd like to watch it again. As far as I recall, it followed along with the book really quite well.
Re-reading through it though, I was captivated by how well written it was, drawing you into the world of these fantastical woodland creatures and their lives. It strongly reminded me of Thornton Burgess's books that I read a lot growing up.
The Wind in the Willows follows the story of Mole, a simple hole dweller who one day gets fed up with his spring cleaning and takes off through the woods to look for something different. He then means Ratty, a water rat, who shows him the joys of the river. They have many adventures together, including several run ins with Toad, a egotistical, petulant and wealthy woodland creature. This story tells a lot about friendship, selfishness and money.
Even though this time I was reading it later in life at an age that the book was not geared toward, I still found it fun and quite insightful. I would recommend it to all ages as a refreshing and relaxing read. :)
P.S. There are a lot of film versions of The Wind in the Willows. The one I watched growing up was the 1995 version.