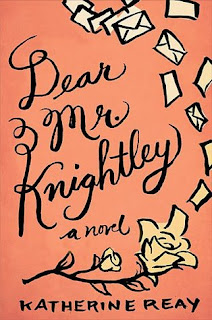 I recently got to chose the next book for book club and naturally I was ecstatic. The trick is to chose a book I've been wanting to read but yet a majority of the other members of the book club would be interested in. I'd been wanting to read Dear Mr. Knightley for a couple years now and had even gotten it when there was a deal for the kindle version but still hadn't yet read it. This was my excuse to force me to finally get around to it and I knew other members of my book club were Jane Austen fans too so it seemed the perfect choice. IT WAS!!!!!
But before I go into raptures... here's a quick synopsis from Goodreads.


Dear Mr. Knightley is a contemporary epistolary novel with a delightful dash of Jane Austen. Samantha Moore survived years of darkness in the foster care system by hiding behind her favorite characters in literature, even adopting their very words. Her fictional friends give her an identity, albeit a borrowed one. But most importantly, they protect her from revealing her true self and encountering more pain.
After college, Samantha receives an extraordinary opportunity. The anonymous “Mr. Knightley” offers her a full scholarship to earn her graduate degree at the prestigious Medill School of Journalism. The sole condition is that Sam write to Mr. Knightley regularly to keep him apprised of her progress.
As Sam’s true identity begins to reveal itself through her letters, her heart begins to soften to those around her—a damaged teenager and fellow inhabitant of Grace House, her classmates at Medill, and, most powerfully, successful novelist Alex Powell. But just as Sam finally begins to trust, she learns that Alex has secrets of his own—secrets that, for better or for worse, make it impossible for Sam to hide behind either her characters or her letters.

First off.... SPOILERS FOLLOW!!!! Sorry, not sorry. If you want a non spoiler review though here it is. Basically if you love Jane Austen and classic literature you'll probably love this book too.