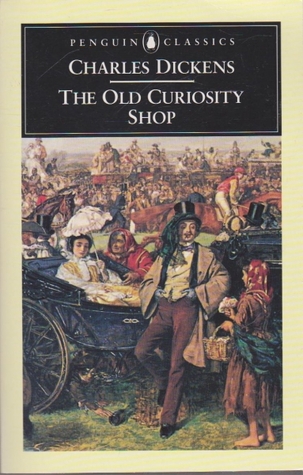 
Synopsis from Goodreads: Giants, dwarfs, tricksters--here is the dark side of Dickens at its most powerful and bizarre. The story of 'Little Nell' gripped the nation when it first appeared. Described as a 'tragedy of sorrows', it tells of Nell uprooted from a secure and innocent childhood and cast into a world where evil takes many shapes, the most fascinating of which is the stunted, lecherous Quilp. He is Nell's tormentor and destroyer, and it is his demonic energy that dominates the book. The Old Curiosity Shop is a novel of contrasts: youth and old age, beauty and deformity, freedom and restraint. Expansively comic, sentimentally tragic, it is sometimes fairytale, sometimes myth and often Victorian life at its most bleak--haunted by the figures that live in the shadows, some of the strongest of Dickens's many creations.

Spoilers follow.
This was probably my least favorite of Dickens' novels, though still enjoyable. I know it was stunningly popular when it came out back in the day so I'm probably just alone in my opinions. I'm not quite sure what it is I didn't like about but I'll try to speak to it as best I can. I think it all goes back to theology so bear with me. I remember a conversation years ago where my dad stated (and I think I've read this somewhere before too) the problem with Dickens is that he believes in the innocence of children. I know that all can be kind of controversial and I'm not going to sit here and argue that in a blog post but long and short of it is that I don't see any biblical basis for believing in the innocence of children. So back to the book, I felt like this theology seeped into The Old Curiosity Shop strongly in the shape of "Little Nell". Perfect, sweet and untainted Nell. Sickeningly sweet. Nell also has a crazy grandfather who has tried to make a fortune for her by borrowing money off of evil Quilp and then using it at the gambling table. Yeah, that didn't work out so well. Maybe it is just me but I couldn't figure out if her grandfather was already crazy at the beginning or he just became crazy after he got the shock of realizing he was ruined. I don't know but the long and short of it is I think the real word for him is "jerk". He drove me crazy and I'm sorry but if I was Nell I would not have put up with all of that. It was just ridiculous. There were far better options I'm sure. For one, taking up Kit's offer of moving in with his family. Yeah I know that Nell couldn't because her grandfather had some sudden explicable dislike of Kit but I don't think that's a valid excuse. Hello he was crazy! I just think Nell's decision were stupid. She was putting up with a lot from her grandfather and the decisions weren't easy ones at all but I think she could have made a few better decisions. I saw this quote HERE in a review of the book and I liked how it described Nell and her grandfather. "Nell and her grandfather were so melodramatically pathetic that, although I felt sorry for their situation, I couldn't get myself to really care about the outcome." I really like how the reviewer put that and I think that is so true! In the end Nell dies and sure it was sad but I really didn't feel too touched by it. I just wanted her grandfather to die so she could live a normal life. Yeah he does die... but AFTERWARDS so it doesn't count. :(
Now there were things I like about the book. Kit for example was my favorite character. He's kind, dedicated and hardworking. I really thought that him and Nell should get together but I think it worked in the end that they didn't... all things considered they couldn't  *ahem spoilers*. I also really liked Dick Swiveller. At the beginning you don't care for him too much and you aren't supposed to but he really improves. And duh of course him and the Marchioness belong together! I shipped them. ;) Quilp the villain was well done I thought. He was convincingly evil. I felt sorry for his wife but my feeling sorry for her only went so far because I was absolutely fed up with her for still liking him. Some of the secondary characters were quite interesting. The people that Nell and her grandfather meet on the road are interesting and sometimes humorous as well. The Bass siblings were evil but rather hilarious. I love Swiveller's commentary on them. This quote is one of my favorites.

"It's no use asking the dragon," thought Dick one day, as he sat contemplating the features of Miss Sally Brass, "I suspect if I asked any questions on that head our alliance would be at an end. I wonder whether she is a dragon by-the-by, or something in the mermaid way. She has rather a scaly appearance. But mermaids are fond of looking at themselves in the glass, which she can't be. And they have a habit of combing their hair, which she hasn't. No, she must be a dragon.

See what I mean? Hilarious! There were other little things like that were quite enjoyable and funny. It was humorous how Dickens referred to a lot of characters as "the dragon" or "the single gentlemen" and didn't name them.
I think this book is definitely about contrasts, as the synopsis points out. Maybe that was part of what turned me off from this book. The contrasts were too strongly emphasized. I'm not sure.
I did like it but it just wasn't up to others of Dickens' novels. My feelings are mixed. I don't feel like my feelings on this books come together too well. They're all muddled. However that's the best review I can come up with. :)