Hamlette from Hameltte's Soliloquy is having a We Love Superheroes Week over on her blog so you NEED to go check it out if you love superheroes in any way shape or form... she's including everything from Marvel to DC to Dr. Horrible's Sing Along Blog to The Incredibles so you know it's going to be awesome! To kick off the week she's having a tag, which of course I'm going to fill out as you know me and my affinity for tags.
And to really get myself in the mood I think I'll listen to a little music from Dr. Horrible's Sing Along Blog. :)


1. Who are your favorite superheroes? (Go ahead and list up to five if you want!) 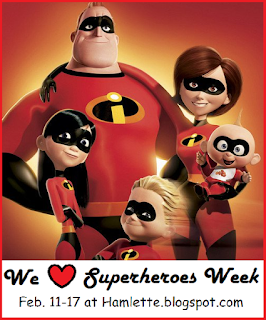 Wow.... how to choose? I love The Incredibles, all of the Captain America movies, both Guardians of the Galaxy and the first Avengers movie. Those are probably my favorites.

3. Do you have a favorite superhero couple?

Captain America and Peggy Carter. I love that she was interested in him before he got all interesting if you know what I mean. Also of course Mr. Incredible and Elastagirl. <3

4. What was your introduction to the world of superheroes?

The first superhero movies I can remember watching were the Toby Maguire Spiderman movies. After that it would have been The Incredibles. Then in 2012 we watched The Avengers and we've been going steady since then.

5. If you could be any superhero for a day, who would you like to be?

6. Do you have a favorite supervillain?

Loki perhaps? I'm not one of those fangirls but it is easier to like him then most super villains.

7. Can you think of a superhero who should get their own solo film, but hasn't yet?

8. Do you read comic books?

*Hangs head in shame* No. My dad was always a fan but I didn't pick that up.

Honestly it's nothing deep. They're fun, action packed and inspiring (not in a super deep way but still).

10. Have you ever cosplayed as a superhero? Feel free to share pics if you want!

No... unless you count my batman pajamas. ;)

Email ThisBlogThis!Share to TwitterShare to FacebookShare to Pinterest
Labels: Tag