For the Classics Club I read The Lost World by Sir Arthur Conan Doyle. 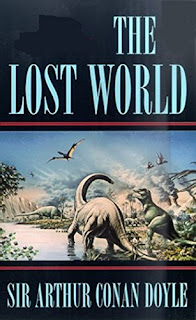 Synopsis from Goodreads: It's London, 1907. Journalist Edward Malone, rejected by the woman he loves because he is too prosaic, decides to go in search of adventure and fame to prove himself worthy of her. Soon after, he meets Professor George Challenger, a scientist who claims to have discovered a 'lost world' populated by pterodactyls and other prehistoric monsters.

Think Jules Verne or Jurassic Park (which actually has a sequel with this same name) and you've got the gist of The Lost World. Edward Malone takes off on an adventure to impress the love of his life after she rejects him and labels him too boring. With Professor Challenger, a man as full of himself as Doyle's other character Sherlock Holmes, he travels to South America and there discovers the 'lost world'. There are predatory natives, dinosaurs and other horrors and dangers awaiting them. The Lost World is a fun adventure story with plenty of action and surprise to keep you turning the pages. I liked all of the characters, though Professor Challenger definitely got on my nerves quite a bit. I felt bad for Edward Malone in the end that the girl he set out to impress had married someone else by the time he came back. Honestly though, she wasn't that great if she was going to send him off on crazy quests just to impress her. Sot it worked out better for him in the end.
Overall The Lost World is a fun adventure story and I'd recommend it to fans of Jules Verne or Jurassic Park.