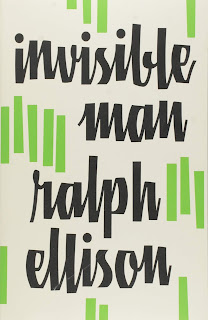 Synopsis from Goodreads: First published in 1952 and immediately hailed as a masterpiece, Invisible Man is one of those rare novels that have changed the shape of American literature. For not only does Ralph Ellison's nightmare journey across the racial divide tell unparalleled truths about the nature of bigotry and its effects on the minds of both victims and perpetrators, it gives us an entirely new model of what a novel can be. As he journeys from the Deep South to the streets and basements of Harlem, from a horrifying "battle royal" where black men are reduced to fighting animals, to a Communist rally where they are elevated to the status of trophies, Ralph Ellison's nameless protagonist ushers readers into a parallel universe that throws our own into harsh and even hilarious relief. Suspenseful and sardonic, narrated in a voice that takes in the symphonic range of the American language, black and white, Invisible Man is one of the most audacious and dazzling novels of our century.

I knew nothing about this book before reading it and I don't even remember why I added it to my Classics Club back in the day. I am glad I did though. I didn't love it by any means but it was very interesting and you can't help but learn from it and appreciate the cultural significance it has.
Occasionally I was frustrated by the protagonist's (never named) seeming naivety. I do think he got wiser as the story went on. It was unspeakably hard for him though as he was demeaned and brainwashed. I came away from the story feeling sad. It was a very real and truly depressing story.
I would recommend it though as I feel like I learned a lot from it. It does have some language and some innuendos and obviously some degrading comments about African-Americans, which are in context of the story.
If you've read it let me know what you think.