I know I'm supposed to be focused on my wedding right now and not blogging but it's ROBIN HOOD WEEK!!!!!! Go check out the festivities over at Meanwhile in Rivendell!
Olivia has some great questions to kick off the week so here are my answers! 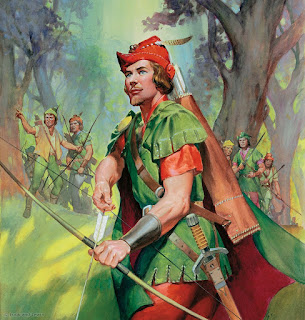 What was your first exposure to Robin Hood? My family grew up watching the 1938 version with Errol Flynn and Olivia de Haviland. It's still a favorite for us. I actually didn't get exposed to the animated Disney film until later though I was still young. I watched it when I visited my uncle and aunt and I loved it so much it was all I would watch the whole time I was there. Needless to say everyone else got quite sick of it. I don't think I've actually seen it since then as my parents don't have it. In retrospect it wasn't that great but still fun.
On a scale of 1 to 10, how big a fan are you? Hmmmm. Six? I had a phase in my childhood where I read a ton of books about Robin Hood and I've always loved the movie but I know there's plenty of areas in the Robin Hood that I haven't delved into.
How many versions and spin-offs of the legend have you experienced? I've watched the 1938 film, the animated Disney film, another adaptation that I can't even find on IMDB at this time and then I've read Howard Pyle's and Roger Lancelyn Green's books on him. I think I've read a couple other books but I don't remember authors. I also watched the first season of the BBC show thanks to Olivia begging me to. ;) I enjoyed it but I just haven't made it back to it yet. I really want to watch Robin Hood Men in Tights but I haven't made it there yet either.
What is your favorite version of Robin Hood (can be book, movie, TV series, anything)? Probably the 1938 film.
Are you one of the lads? (Meaning, have you watched/are you a fan of the BBC show?) As I said above, I've watched a season and hopefully will make it back for the rest of it in the future.
Who is your favorite Merry Man? I like Little John a lot and Friar Tuck.  And of course Robin Hood himself is awesome.
Do you have a favorite portrayal of Lady Marian? I've enjoyed every portrayal of her honestly. No real favorite.
Do you have any interest in or aptitude at archery? Interest? Yes! I've always wanted to learn archery. Aptitutide? Well... I've never actually tried.
Fact or fiction -- which do you think? I think there's probably some truth to the legends. How much is fact and how much is fiction I'd be hesitant to say. Regardless, it's a fun story.
Do you think Robin Hood has been "done to death," or are there still new twists that can be found? In some ways I think it has but I'm also not against remakes as long as it's a fresh perspective and isn't stupid. Is that too much to ask? ;)

Well there are my answers! Go check out the fun at Meanwhile in Rivindell and join in!
Also, go check out some fun giveaways over at Hamlette's Soliloquy. She's giving away many of the books and movies I mentioned!

Follow my blog with Bloglovin
Posted by Lois Tinúviel at 10:08 AM