For the 2016 Period Drama Film Challenge and because as an avid Jane Austen enthusiast I consider it my duty to, I will be reviewing the film Love and Friendship. 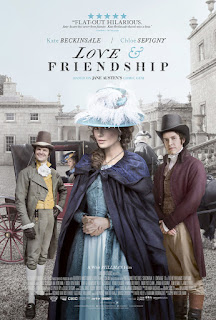 Synopsis from IMDB: Lady Susan Vernon takes up temporary residence at her in-laws' estate and, while there, is determined to be a matchmaker for her daughter Frederica -- and herself too, naturally.

Love and Friendship is based off of Jane Austen's epistolary novella Lady Susan but actually uses the title from a novel she wrote as a juvenile.

The film kept pretty closely to the book with a few minor deviations that I do not think detracted from the story and some of them were rather humorous. Since Austen's actual story was written in the form of letters, most of the dialogue was not hers as she really didn't have any. The screenwriter though did an excellent job, I thought, with dialogue and it had me laughing several times. The main character being less than reputable is quite a contrast to Austen's other works, so one has to reconcile themselves to that. I think though there are plenty of reputable characters in the story to make up for Lady Susan. My mother commented that she felt that Lady Susan was like Becky Sharpe of Vanity Fair, which I would somewhat agree with. Lady Susan is a far more sophisticated Becky Sharpe and I feel that Jane Austen wrote a nicer, as in more polite, novel than Vanity Fair was. It's interesting to contrast though. I did feel like they made Lord Vernon too dense, which annoyed me. Also, in the book, Reginald de Courcy breaks it off himself with Lady Susan as he truly sees through her.  However, in the film she breaks it off with him in the pretense of him accusing her falsely and not wanting to be in a relationship where trust was no paramount. With breaking it off with him though she planned to use that to make herself look innocent and hopefully get back together with him, which in the end she does not do. I just felt like it made Reginald seem more gullible then he really was. That all made me think of Edmund Bertram and Mary Crawford in Mansfield Park and I think there are some parallels to draw there as well, though Mary Crawford with all of her faults was not as immoral as Lady Susan. Besides those couple instances the slight deviation were not irksome, at least to me.

There were a few actors I was familiar with. Kate Beckinsale, who plays Lady Susan herself, is Emma in the 1996 version of Emma. Stephen Fry, who has a minor role as Mr. Johnson, is well known to us as Jeeves from Jeeves and Wooster. Jemma Redgrave, who plays Lady de Courcy, I know from Doctor Who where she plays Kate Stewart.

When it comes to the appropriateness of the film as far as anything shown it was entirely appropriate. However, Lady Susan is basically a loose woman. She's conniving and manipulative. She uses her talents as a flirt and her knowledge of men to get what she wants in life. Therefore there are those themes throughout the film. 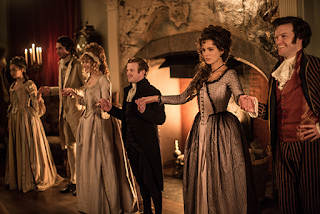 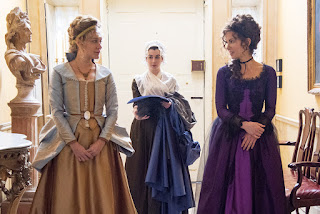 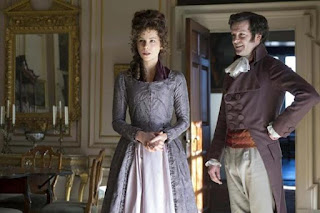 Overall I enjoyed Love and Friendship and thought it was a delightful addition to anyone's collection of Jane Austen films.