For the Classics Club I read Rudyard Kipling's novel Kim. 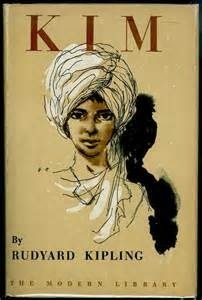 Synopsis from Goodreads: Kim is set in an imperialistic world; a world strikingly masculine, dominated by travel, trade and adventure, a world in which there is no question of the division between white and non-white.Two men - a boy who grows into early manhood and an old ascetic priest, the lama - are at the center of the novel. A quest faces them both. Born in India, Kim is nevertheless white, a sahib. While he wants to play the Great Game of Imperialism, he is also spiritually bound to the lama. His aim, as he moves chameleon-like through the two cultures, is to reconcile these opposing strands, while the lama searches for redemption from the Wheel of Life.
A celebration of their friendship in a beautiful but often hostile environment, 'Kim' captures the opulence of India's exotic landscape, overlaid by the uneasy presence of the British Raj.

I really didn't know much about this story before I started it so much so that I thought Kim was a girl. For everyone else out there who's like me, no, Kim is not a girl, he's a boy. Just thought we'd get that out of the way.
Starting out I listened to an audiobook of it which was interesting to have the different voices bringing the story to life. It was taking me a long time though and I ran out of renews from the library. Since I actually owned a copy I decided to just go ahead and read the rest from the book but since it had take me such a long time and I was so off and on in reading it I actually started over and read from the beginning. That actually helped me a little bit with understanding the story. Overall I found the story a little hard to follow. I don't know if that's partly because of the unorthodox way I went about reading it or how long it took me to finish it or maybe a combination of both. The characters were interesting and I really found Kim's story intriguing. However, overall I found the story not as exciting as I feel like it could have been. Again, maybe that has to do with how I read it. I just feel like it had everything going for it with an interesting plot line and characters but just didn't quite follow through with how it was carried out.
So with all of my rambling thoughts said, I did enjoy the book but didn't love it. Have you read Kim? What are your thoughts?