Book Review- The Mark of Zorro 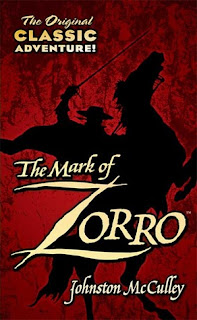 
Synopsis from Goodreads: Old California, in a bygone era of sprawling haciendas and haughty caballeros, suffers beneath the whip-lash of oppression. Missions are pillaged, native peasants are abused, and innocent men and women are persecuted by the corrupt governor and his army.But a champion of freedom rides the highways. His identity hidden behind a mask, the laughing outlaw Zorro defies the tyrant's might. A deadly marksman and a demon swordsman, his flashing blade leaves behind . . .

This is basically a classic Robin Hood story. It's fun, adventurous with a dash of romance. It's not superior writing or beautiful prose it's just good clean fun. There's honor, veracity, love, hate, mercy revenge, good and evil. They don't write stories like this anymore.
If you like Robin Hood and stories like it you'll love this story too.