I've never been a goals and resolutions kind of a person and I have never up to this point made any New Year's resolutions. However, after a little over a year of doing monthly resolutions, I think it's time. I tried to make these kind of general and they reflect my monthly resolutions…. I'm a creature of habit. 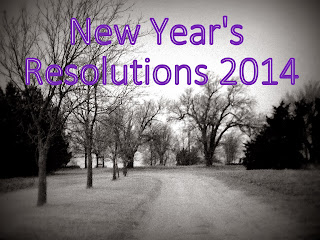 Last year my goal was 50 and I want to up it this year.  Not by much obviously but let me tell you my logic here. Sixty is divisible by twelve, so that gives me a goal of five books a month. Also, sixty is a nice even number, unlike certain numbers divisible by twelve. A little math logic for everyone to start their year off. ;)

There's twenty-four verses so I'll split it up into two verses every month to make it more manageable.

Keep up with my Spanish

I've become incredibly lax with retaining what I learned and I really want to keep that knowledge!

Prayer is something I feel I really lack. I'm hoping to keep some sort of prayer journal or something to keep me on the ball about this.

Do 1 Crochet Project Per Month

I didn't crochet much last year but his year I'm hoping to make a few things that have been on my "want to make" list for awhile.

Just write…. I pretty much had to give up writing last semester because I was so busy with school I couldn't justify spending my time on writing. This year hopefully I can budget in some writing time.

I lost about ten pounds last year but then plateaued and then halfway gave up and now I'm back at it! This year I want to lose those last pounds and get to my goal weight.

My overall goal for the year really is to be more organized and diligent in what I do and in what I do, I want to do all to the glory of God.

Lois Johnson, avid writer, tea drinker, and reader but first and foremost, avid Christian.
Posted by Lois at 11:01 AM

Email ThisBlogThis!Share to TwitterShare to FacebookShare to Pinterest
Labels: Resolutions