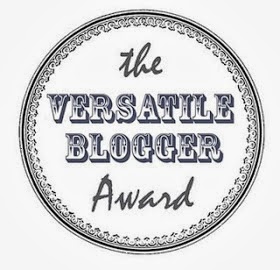 So two posts in a day? What's up with that? Well I just found out I've been nominated for the Versatile Blogger Award!!! This is my first blogger award I've been nominated for so I'm kind of just a little bit SUPER excited. :) I was nominated by Morgan from Morgan's Blog, which is a fun blog with all sorts of interesting fashion tidbits and other fun stuff. Thank you Morgan!
So I'm supposed to include seven fun facts about myself but as y'all know all facts about myself are fun. ;) So anyways, here are my seven facts. I tried not to include any that you could find anyways on my blog.
1) I'm always cold.... I guess except for when it is like 100˚ but only then!
2) Drinking tea is actually a mood thing for me. I have to be in the mood to drink tea... lately I've been in the mood.
3) I'm a phases kind of a person... like as I mentioned with drinking tea. Sometimes I am in a phase of eating pancakes, other times I'm really into eating salad. However, I am ALWAYS in a greek yogurt phase.
4) I'm always tired. If you know me well, you already knew that.
5) I don't talk to Siri all the time on my iPhone. I really pretty much never do. I can think of a couple distinct times that I remember talking to Siri since I got it in April.
6) I quote movies, YouTube videos, books, my family, and anything else that could possibly be quoted. Originality doesn't exist with me.
7) I saw a meme the other day that said "Having inside jokes with yourself." I looked at that and I knew that was me. Yep... no life. :)

I think those facts about me were INCREDIBLY fun!
So now for my nominations for the Versatile Blogger Award.
Suzanne from Just Another Girl
Kaylin from Average Christian Geek
Hayley from Victorious Heroine
Katie from Katie Lyn
I assume we can't nominate someone who has already been nominated but if I could I would totally nominate Morgan again!
There were supposed to be fifteen nominations but I can't think of anyone else! Sorry if I forgot you!

If you were nominated the rules for the award can be found here. Have a great day!

Lois Johnson, avid writer, tea drinker, and reader but first and foremost, avid Christian.
Posted by Lois at 11:35 AM